Before the burn: Downtowns Life Cube an inviting canvas for artists

Before the burn: Downtowns Life Cube an inviting canvas for artists. 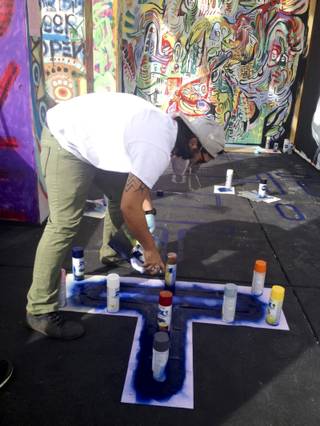 Downtown’s Life Cube is taking on a, well, life of its own.

The 24-by-24-foot wooden cube was built last week on a poured concrete slab in the middle of the “llama” parking lot on the north side of Fremont Street between 9th and 10th streets.

As soon as it was done, artists and non-artists started to paint its whitewashed walls. The upper half is being reserved for muralists, perhaps as many as 20 of whom will add their own flourishes to the cube.

L.A.’s Christina Angelina began her mural, which will stretch from one wall to another, Monday night.

Almost every day, the lower half of the walls, open to everyone, change as new artists paint over old, like intricate mandalas in sand erased as soon as they are done.

“That’s the whole point of the ephemeral,” says Scott Cohen, mastermind and energizer bunny of the Life Cube. “If you’re here to see it, cool. But if you’re not, it’s going to be something else tomorrow.”

And in less than two months, all the art, along with thousands of wishes and desires, will be burned into the heavens anyhow.

That’s the real point of the Cube, which is Cohen’s dream made manifest. Having burned cubes at the annual Burning Man festival in Northern Nevada the past few years, this is the first time he’s brought it into an urban sphere.

The Cube is a community and philosophical endeavor. Cohen says it is already drawing hundreds of local artists and non-artists from Las Vegas downtown, and people who would never have otherwise met are seeing new faces.

It is also a way to grab hold of something he believes in — that writing down a dream helps make it a reality — and unleash it upon thousands of everyday people and their unmet dreams.

Scott Cohen signals to the Life Cube Tuesday, Feb. 4, 2014. The Life Cube is a 24-by-24-foot wooden cube that will be filled with smaller cubes and thousands of people’s wishes before going up in flames on March 21.

When the cube is ready to accept written submissions on Feb. 21, people will be allowed to jot down their wishes or dreams on “wish sticks” — postcards, basically — and put them into slots in the structure. Some 40 or 50 smaller cubes will also have been placed in schools and businesses around the city, where people will be encouraged to do the same with available wish sticks.

On March 21, most or all of the smaller cubes will be fitted into the larger cube, which by then will have been adorned with so much light, Cohen says it will be the brightest object downtown by far.

Later that night, the whole thing will be set on fire. All the wishes will rise to into the heavens, along with the art.

Steve “Mowgli” Moffett, a Las Vegas artist creating a PacMan board on the floor of the structure Tuesday afternoon, has no problem seeing the work go up in flame.

“It’s great that so many local artists are getting the chance to be a part of this,” Moffett says. “To bring this aesthetic to a city, especially Las Vegas, is awesome.”

Harlan Emil Gruber, who makes artistic structures from wood, too, which he’s displayed at Burning Man, stops by on his way from Grass Valley, Calif., to the Tucson, Ariz., Gem and Jam Fest. He and Cohen engage in a mindreader-fast back-and-forth about Burning Man, wood construction, art and what’s to come in the few minutes Gruber sticks around.

“I’m just so impressed that he’s able to bring this to the real world” versus the Burning Man world, Gruber says.

Then there’s sheet metal worker Anthony Calderone, an HVAC man who has turned his focus increasingly toward painting, but is also looking into the creation of steampunk pieces. His first is a Flash Gordon-esque looking “gun” he pulls out the backseat of his car.

And there’s artist Caitlyn Saville, Cohen’s artist organizer, who “lives, breathes and sleeps” the LifeCube — as a volunteer. “Every day I get home, there are 100 emails to answer — people asking how they can help,” she smiles. “It’s almost like a job.”

Justin Lepper, who builds pools for a living but also writes books, has been steeped in political operations and is getting more into his own art. 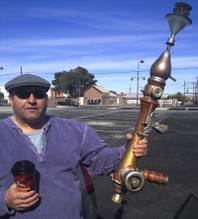 Sheet metal worker Anthony Calderone, lured by the Life Cube, shows off his the steampunk gun he fashioned from all sorts of discarded items of various shapes and sizes Tuesday, Feb. 4, 2014.

“There’s a contagion going on,” he says, referring to the connections being made via the Cube.

After meeting a month or so ago, Lepper says Cohen’s energy was so infectious, he had to work with him on the project.

“When you get the opportunity to do something this cool,” says Lepper, who worked on the Cube until 5:30 a.m., went to work and returned around noon, “you put everything you have into it,” he says.

Though flooded with requests from those in other cities who want him to do the same, he says he has to put those all on the backburner until this one, a 1 1/2-year endeavor, is finished. It’s not just construction of the Cube.

Cohen has a growing list of schools, organized on his Blackberry, who have invited him to speak about the Cube. In fact, his wife, Madeleine, of 25 years shows up around noon to whisk him away to just such an engagement.

Madeleine is dressed in business attire to her husband’s casual California.

“He was a businessman, too,” she says of his past. “Great at team building, brand orientation and with the kind of energy that makes people want to work harder.”

In a parking lot empty but for a massive wooden cube, that much is very clear.