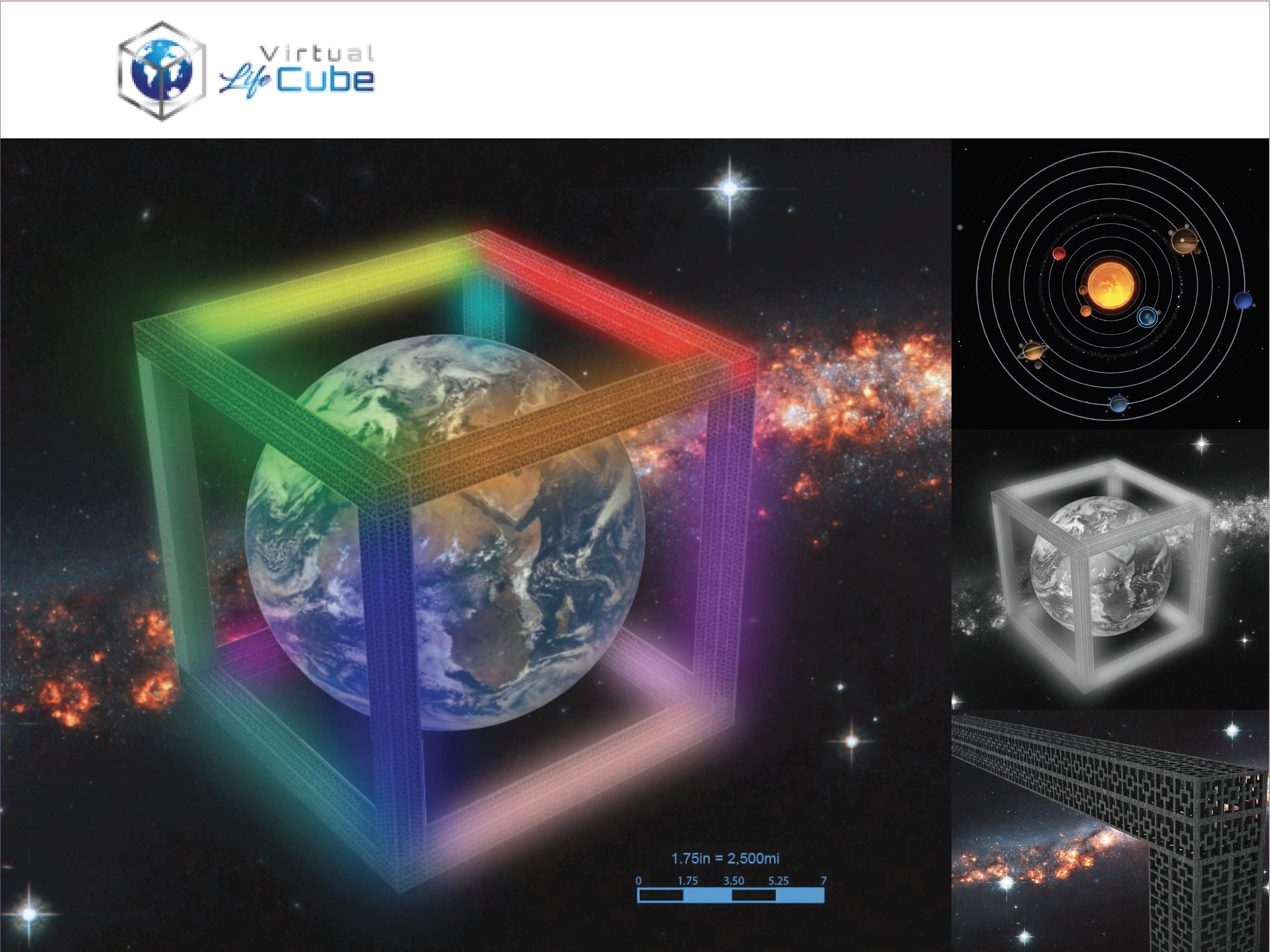 Easton, MD – The Life Cube team is developing the most far-reaching, interactive and collaborative art installation in the world! The Virtual Life Cube will be designed to surround the planet Earth, providing a venue for visitors to write down their goals and dreams, and share their artistic and creative contributions. This re-envisioned Life Cube made its premiere on multiple platforms (including 3D!) at Virtual Burning Man in August/September 2020.
In every installation, whether actual or virtual, the Life Cube is a collaborative community art that provides an engaging and interactive place for the shared expression of ambitions, dreams, goals, and wishes. The project encourages participants to look at their past, engage in the present, and set goals for the future. It is based on the artist’s belief that if you write down what you want to accomplish in life, the chances of attaining it are much, much higher!

Get inspired! Watch the Life Cube artist describe the project in this short video...

The Life Cube at Burning Man 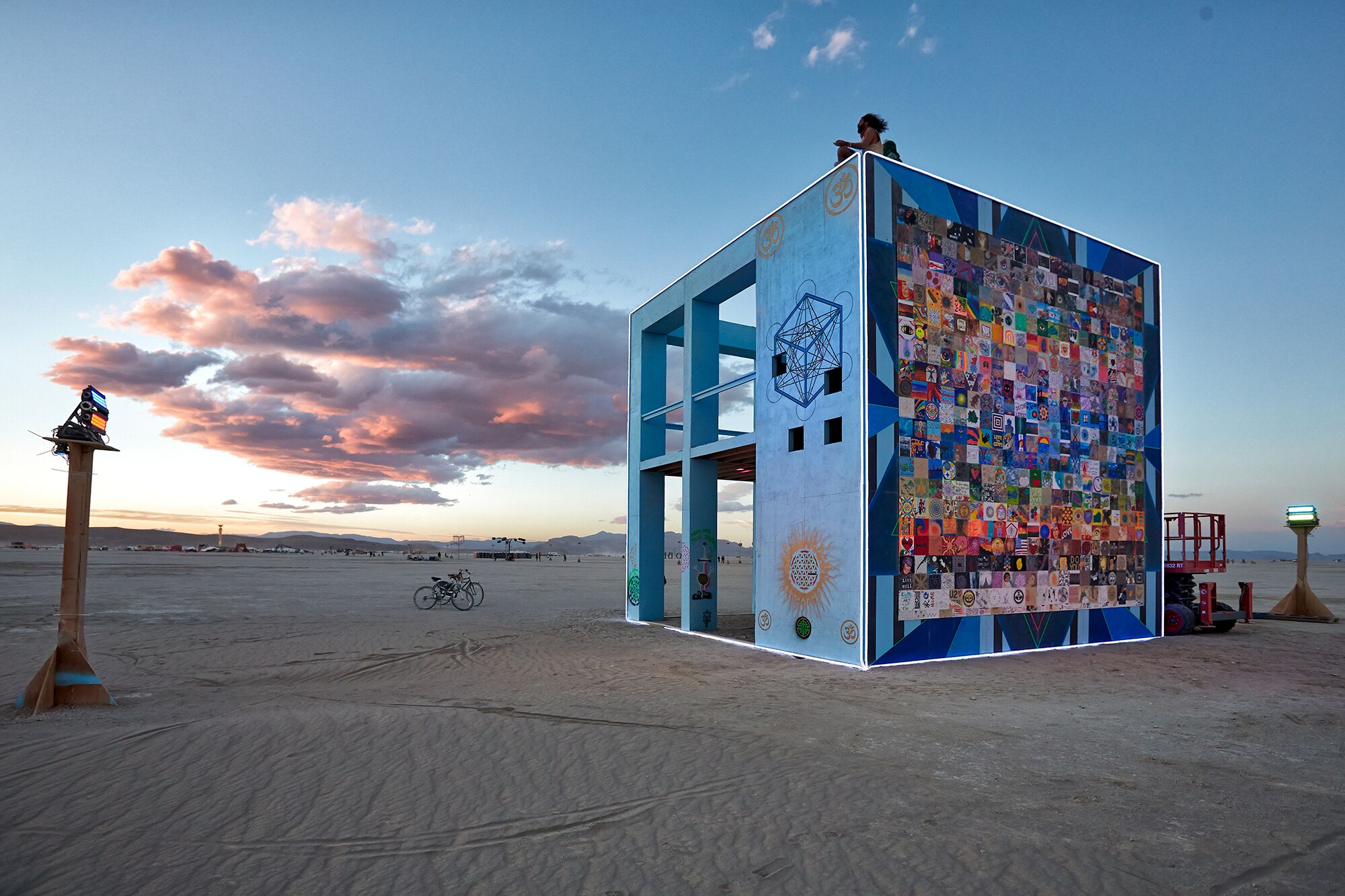 Over the course of three years, and returning as an Honorarium project in 2015, the Artist and his project team designed, built, and burned Life Cubes at Burning Man. The first Life Cube, an eight-foot square, was planned in 2010 and erected in 2011, and the artist was motivated to build another version of the Life Cube the following year. In 2012, its dimensions expanded to sixteen feet, enhanced by writable surfaces for greater interactivity and a more creative and graphic external skin. The third Cube came together in 2013. It featured a more complex and compelling multi-level architectural design with a pillared facade, more surfaces for writing and drawing, a tapestry wall, colored strobes and spotlights, and giant painted murals. 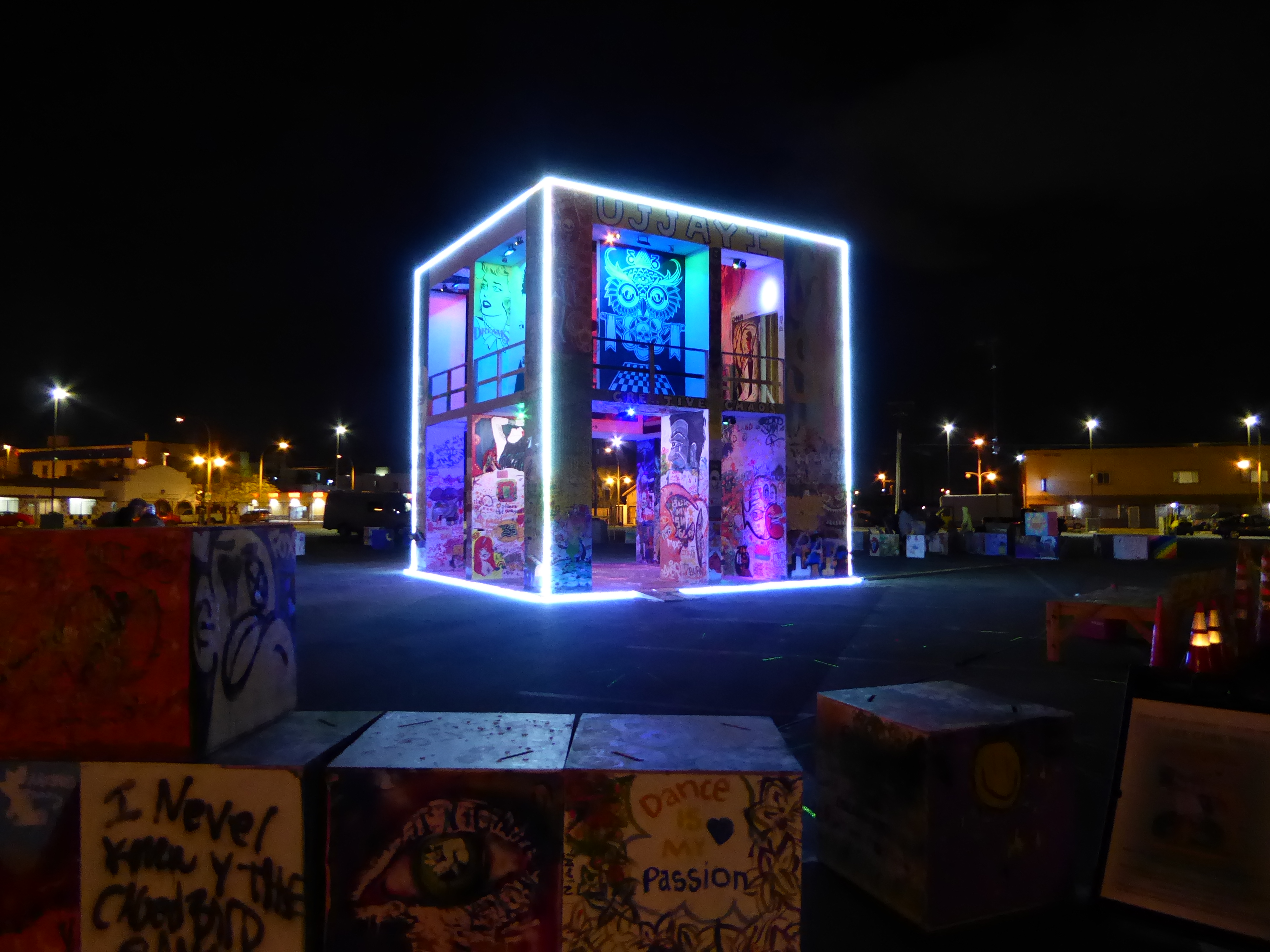 In 2013, artist Scott Cohen was invited by the Downtown Project to develop the Life Cube Project for Las Vegas. In January 2014, a Life Cube was constructed on an entire city block in the East Fremont district of downtown Las Vegas. Open to the public 24/7, local artists and members of the community painted all of its surfaces. The Life Cube was covered in constantly evolving and overlapping murals, hosting handwritten and painted messages from its visitors who wrote their personal hopes and dreams on “wish-stick” postcards and dropped them inside. Locally owned shops, bars, and restaurants joined with the Gay and Lesbian Community Center, churches, and Las Vegas’ City Hall in the project’s goal-setting theme to their constituencies through the satellite cube program.[6] On the night of March 21, the Cube burned in a ceremony involving thousands of participants and viewers. The Life Cube returned to downtown Las Vegas in March 2016 and burned on April 2, 2016 in yet another celebration.

In 2015, a non-burning metal and glass Life Cube was featured at the Reno Sculpture Fest. The 12’ sculpture included murals, Tapestry Walls, and art and wishes contributed by 1,000s of schoolchildren with outreach to prison inmates, recovering addicts, and challenged youth. Unlike previous Cubes, where “Wish-Stick” postcards were placed inside and burned, this Cube featured a Wish-Tag Wall, where participants wrote on colorful tags tied to the Cube for others to read. The Life Cube was also featured in Yerington, NV in 2015 for a non-burning installation created specifically for the Mason Valley Boys and Girls Club. This installation included a Tapestry Wall consisting of 1,500 8′ by 8′ canvas panels and a Wish-Tag Wall created by students, teachers, staff, and volunteers from nine middle schools and high schools in the area. During this installation, artist Scott Cohen was also invited to speak at the Youth of the Year banquet to encourage students to follow their hopes, wishes, and dreams. In October 2016, the Life Cube Project was featured in its first New York installation at the Riverdale School in Bronx, NY. The 12′ Cube remained on Jones Lawn for over a week inviting students, parents, faculty, and other visitors to paint, draw, write, and collaborate. This Cube did not burn, but the evolving and inspiring art on the structure invited dozens of participants nonetheless.

The Life Cube Project was invited to El Paso, TX from October 6 – 8, 2017 for the 10th anniversary of the annual Chalk the Block arts festival, organized by the City of El Paso Museum and Cultural Affairs Department (MCAD). The artist, Scott Cohen, spent ten days leading up to the installation visiting over 20 local schools to talk to students about goal-setting and connecting art with community. He spoke to youth from military families at Fort Bliss as well as folks at Opportunity house, a local shelter. Following these artist talks and workshops, the 12′ x 12′ brushed metal and canvas Life Cube installation was erected on San Jacinto Square, in the heart of the Arts District of downtown El Paso, and was open to the general public for three days. The Life Cube for Chalk the Block El Paso included all the elements of its signature approach to connecting art and community: live-painting of murals by several local artists, Dream Tags, a Tapestry Wall featuring canvases created by thousands of El Paso students, and—of course—chalk.

THE LIFE CUBE FOR MIAMI BEACH 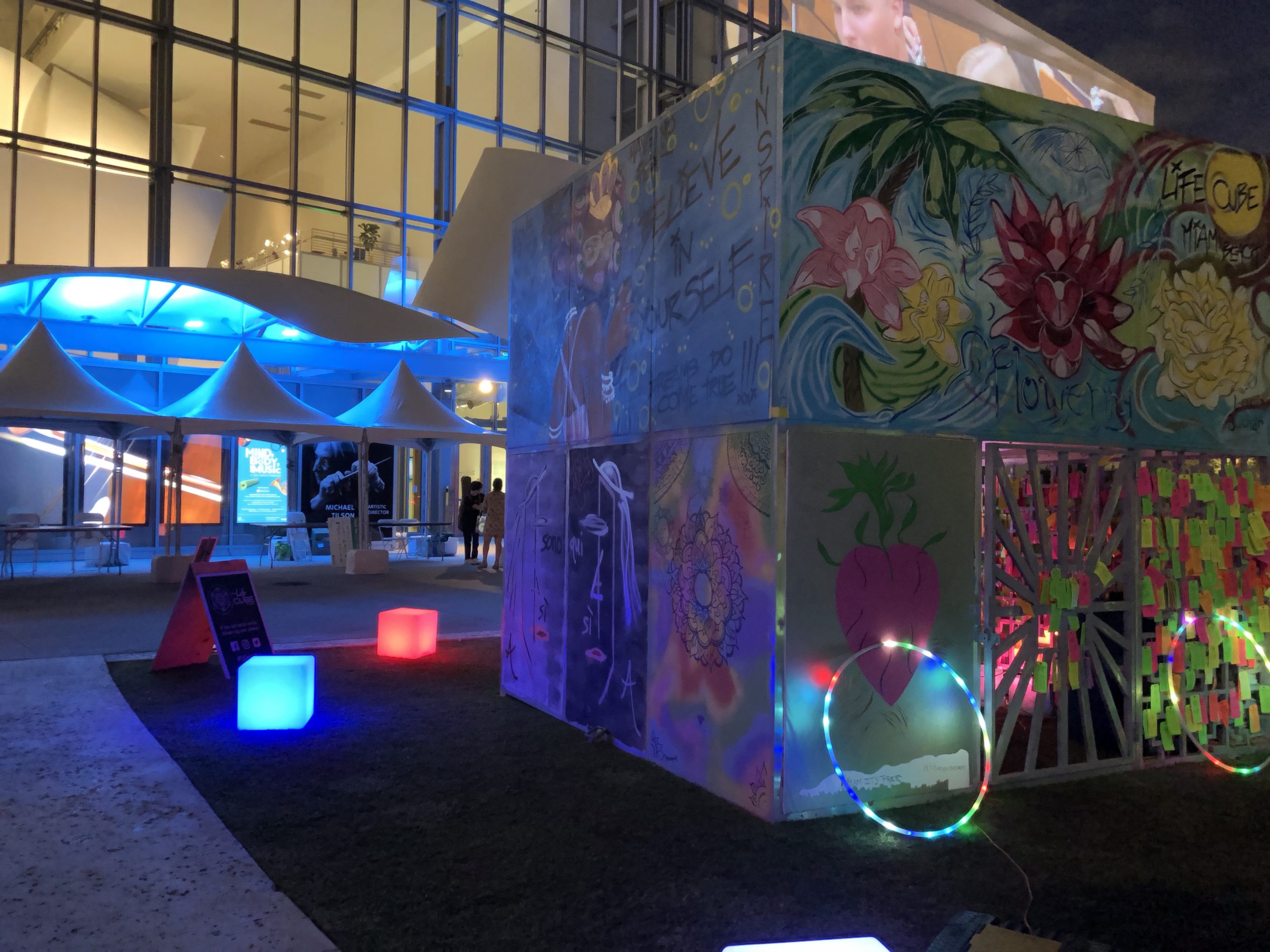 Most recently, the Life Cube Project joined with the New World Center, the Bass Museum and other civic cultural institutions to bring Life Cube Magic to SoundScape Park in Miami Beach. Thousands of schoolchildren were inspired to write down their goals and dreams, hanging them on the Cube together with those of the greater community. Student artwork graced the Tapestry Wall alongside murals from local artists, and children of all ages attending New World Symphony’s Family Day concerts and Bass Museum family art workshops had the chance to hear from and engage with the Life Cube artist and his team.